I’m starting to think about what my portfolio for graduate school might contain, and so far my favorite idea has been to analyze Capital Blvd’s affects on downtown Raleigh. I’m interested in the history of the area, what shaped the route of the corridor, re-imagining the city as if Capital Blvd were never built, and the proposing inventive design solutions that could help bandage some of the wounds it has caused (alterations are being considered, although not all of these can be considered solutions). The first two of these things I’ve already begun looking into, and I thought I’d share them here for those of you interested in the history of the people and shape of this segment in downtown. The second two I will examine after I finish my summer Landscape Architecture program at Harvard as I think I will learn skills there that will better equip me to attack these pieces of the puzzle (side note: I leave for Boston in five days!).

Are we building for cars or for people?

Capital Boulevard is one of the things in downtown Raleigh that I absolutely despise. It cuts the northern part of downtown in half with a solid blockade, and then acts as a perforated line of heavy traffic, only broken through with patience and diligence, through the rest of it. Prior to doing the research for this entry I thought the location, shape, design and existence of Capital Blvd were all completely decided upon as one of the many urban renewal projects of the mid 20th century, many of which had motivations that could be considered racist or classist. However, after doing a bit of digging I’ve found that urban renewal was only part of the storm that created this monster of an artery meant to flush the employees of Raleigh’s City Center back to their suburban homes in the sprawling North Raleigh.

I don’t believe that the automobile is the core issue at hand. Instead, I believe the root of the issue to be the way we’ve built and designed for cars, both those which are moving and those which are parked, instead of for people. In recent history we have concentrated so much on how to move people as fast as possible to their destinations that we seem to have forgotten the importance of making those destinations places where people would actually like to be.

Ever heard of Smoky Hollow?

Smoky Hollow (which I’ve also seen spelled as “Smokey” Hollow) was a blue-collar neighborhood in downtown Raleigh prior to the construction of Capital Blvd in the 1950s. Everything I’ve found hints the it was a racially mixed area with both black and white residents which would have been somewhat unique to that time period. Its boundaries were roughly Peace St to the north, West St to the west, North St to the south and Wilmington St to the east. The residents of Smoky Hollow worked primarily for the railroad, mill, or other industrial businesses in the vicinity.

Children growing up in Smoky Hollow entertained themselves by playing on the train trestles and in the Pigeon House Branch creek, which has now been mostly buried. It was a solid community although it seems like it was considered to have been a little rough around the edges. The construction of Capital Blvd, with the addition of other projects, brought about the end this unique piece of downtown by the early 1960s when almost all the residents were forces to relocate. Only a few pieces of the Smoky Hollow neighborhood remain, including Finch’s Diner on Peace St and the store fronts found to the west of it. The fates of these small tokens remain uncertain now too as the redevelopment of Capital Blvd and Peace St interchange threatens to replace them with a cloverleaf interchange to help flush even more people to even more suburban homes in northern Raleigh.

The Devereux Meadow ballpark, home of Raleigh’s former minor league baseball team, as seen in 1963. In the back right corner you can see the Raleigh Cotton Mill (now condos). Photo from Link Peace Street.

Saint Saviour’s Chapel, formerly located at the corners of Johnson and West Streets. Demolished in 1960, it was replaced by a warehouse which still stands. Photo from Link Peace Street.

So what shaped Capital Blvd?

You would think that if a neighborhood was located within the trajectory of a massive road project, the trajectory might be altered. However, that kind of thoughtfulness was not in the nature of urban renewal, many projects of which were arguably meant to disseminate communities deemed less desirable by those in power. Those communities also generally lacked the societal and economic power to stand up for themselves and run a successful not-in-my-backyard campaign (although really this would be more of a campaign to save their backyards).

I’ve been pawing through the depths of the internet to find historical maps of Raleigh (which as a professed lover of maps, I find to be exceptionally enjoyable). I decided to create my own visual representation of these maps in order to show easily, without all the street names and building footprints, how the pattern of downtown prior to the construction of Capital Blvd affected its placement, and how that placement has in turn affected the pattern of downtown.

Downtown Raleigh in 1953, just prior to the construction of Capital Blvd 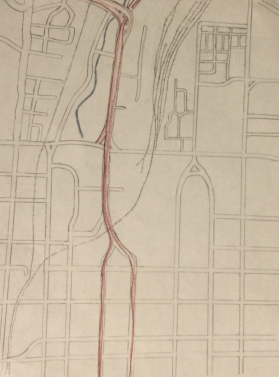 These maps are meant to be tools to easily spot the difference in the overall layout of the city. Drawing them helped me understand really what disappeared, what changed, and what was left unaltered. The main differences I’ve noticed are:

This bit of town is about to undergo even more changes, which I’ve been following closely. If you want to read about the proposed solutions to help funnel traffic from Peace St onto Capital Blvd check out Link Peace Street (who I’ve been crediting and linking for all the photos in this blog, and much of the information on Smoky Hollow as well). The debate about how to do this truly reflects the beginning of a shift towards wanting to design for people. Although a space wasting cloverleaf interchange (please please please, City of Raleigh, no cloverleaf interchange) is being suggested, another option which values people over automobiles, is also on the table.

It seems like we’re beginning to learn from our mistakes, and that we want to learn how to design in a way that would increase our quality of life of residents, and make this part of downtown Raleigh into a community again. Instead of concentrating on making this area a corridor solely for those commuting from the suburbs to downtown everyday, people are trying to create a memorable place that also moves people who live elsewhere through. Capital Blvd is an eyesore, a divider, and also (currently) a necessary evil.

I'm a twenty-something transportation planner with an interest in helping communities increase the quality of life of their residents through the use of community planning, environmental stewardship, and design. I'll be writing about my career, my passions, urban planning/design, and probably some stuff about bikes.
View all posts by Anna →
This entry was posted in transportation, urban design, urban planning and tagged capital blvd, raleigh, urban design, urban planning. Bookmark the permalink.